The long wait for race action did not disappoint in France. The weather was perfect for the two races, and all the top teams completed qualifying successfully with one exception. The first session times were very close, with just eight tenths of one second splitting the top five. Previous new lap record holders Ted and Vincent Peugeot had their eyes opened with the pace, as they ended up sixth fastest behind Tim Reeves/Kevin Rousseau. A brilliant effort by Harry Payne/Mark Wilkes found them top of the pile just over one tenth quicker than Todd Ellis and Emmanuelle Clement. Reigning Champions Schlosser/Fries came next ahead of Steve Kershaw/Ryan Charlwood.

Session two was on a much hotter track, and that proved interesting. Schlosser/Fries turned the tables on Harry Payne and Mark Wilkes to head the times, but generally speeds were a little slower than earlier. Sadly, the Manxmen were to crash with four laps remaining. Harry Payne received treatment at the track, but escaped with bruises, cuts and lacerations to his face.  Benny Streuer/Kevin Kolsch found a bit more speed to go third.

Glorious weather and temperatures in the low twenties prevailed, but that was not in the mind of the teams as the lights went out. The Bugatti circuit is a favourite with many, and the atmosphere was tense. Harry Payne/Mark Wilkes were non-starters, but immediately got on with the job of sorting their wrecked machine for race two.

Reigning champions Markus Schlosser started from pitlane with a problem and was obliged to fight his way through the field. This was an immense task which he and his passenger Marcel Fries rose to with style.

Tim Reeves/Kevin Rousseau made another of their electrifying starts, chased by Toss Ellis/Emmanuelle Clement. Then came a very rapid Streuer/Kolsch from Ted Peugeot and Steve Kershaw.

This leading group were tied together for lap after lap as Schlosser/Fries battled through. They were making up one place each lap, but the job got harder as they neared the front. Reeves and Ellis were neck and neck on lap fourteen, when Ellis made his move on Reeves to go ahead. Once in front, the Santander Salt pair rode sensibly, stretching the gap on each of the closing laps. It was a perfectly measured performance with maximum points to kick-start the season. Streuer was riding well with a podium very much on the cards. He then had a bit of a wobble, with contact affecting Steve Kershaw, throwing him out of his rhythm. This dropped the Scot into the clutches of Schlosser who claimed the final podium place after a sensational race from bog last. Streuer’s race was then effectively over, after such a strong start.

The battle further down was equally enthralling with Kevin Cable/Chaz Richardson claiming a fine eighth behind Vinet, Leglise, and Wyssen.

Harry Payne and Mark Wilkes, despite their enormous qualifying crash, were still working hard to make the bike fit for race two while all this drama was unfolding on track. This was a fine race for Ellis/Clement to get their season underway and the crowd appreciated the team’s efforts with whistles and applause on the slow-down lap.

Reeves showed he has lost none of his determination but must surely know this will be another tough year in a sport which he has ruled supreme for so long. 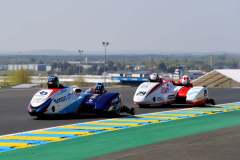 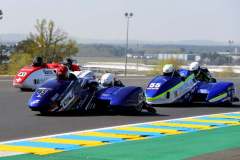 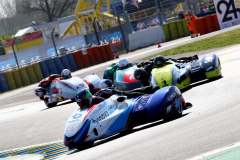 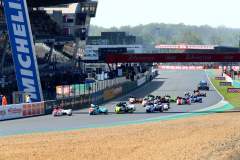 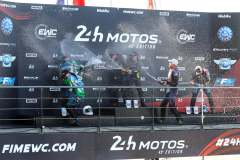 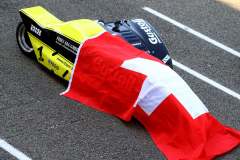 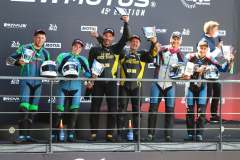 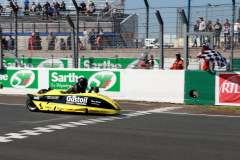 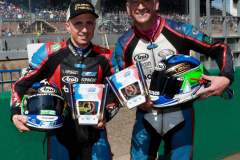 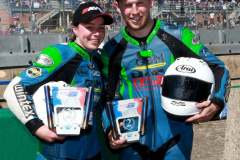 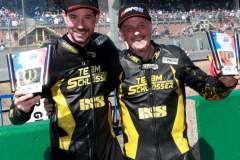 A huge crowd was in place for the second encounter, as the 24 hr Endurance race was due on track immediately after the sidecars. Nonetheless, the French love their sidecar racing and were ecstatic throughout the thoroughly entertaining eighteen laps.

From the lights it was a thrilling run to the first chicane, as Todd Ellis Emmanuelle Clement narrowly headed Tim Reeves/Kevin Rousseau. Markus Schlosser/Marcel Fries. Kershaw/Charlwood sat fourth very much in touch, with Ted/Vincent Peugeot fifth ahead of the first all-French crew Paul Leglise/Melanie Farnier.

Reeves made a pass to go ahead briefly, but Ellis regained control with Schlosser following through. Still Kershaw/Charlwood hung in strongly, and Reeves/Rousseau spent the remainder of the race fending off attacks from the Quattro teamsters.

Lap after lap the freight-train at the front streamed through the turns and flew along the straights in a tightly-knit convoy, with Ellis/Clement eventually succumbing to the Swiss Gustoil crew of Schlosser/Fries.

Third in the first race from the back of the grid says everything about the speed of this pair, and they lived up to that reputation. Their style and smoothness was impressive to watch. Ellis/Clement rode another mature race knowing that runner-up spot would give them the title lead, with Reeves/Rousseau secure in third provided they stayed there.

Kershaw had his nose alongside a couple of times, but the eight-times champion did enough to hold the place.

Harry Payne/Mark Wilkes started from the back of the grid on a twenty-year-old RCN chassis, and fought through for an amazing eighth place, battered and bruised. Benny Streuer/Kevin Kolsch were fast, but their weekend was to be a nightmare and one to forget, with incidents in both races rewarding them with a paltry three points.

Wyssen/Hofer had a good weekend to back up their Gustoil champion team-mates to come away fifth in the standings for Switzerland.

The Peugeot family team had another great ride, with the nineteen-year-old Ted showing maturity beyond his years. Sad to say they will not contest all the rounds due to financial reasons. This is another young talent France, and the sport, dearly needs in the series. France did themselves proud with Paul Leglise and Melanie Farnier taking two strong sixth place finishes to register twenty points.

Talking of young talent, last year’s runners-up Ellis/Clement left Le Mans as championship leaders with seven rounds ahead of them.

Round Two is next weekend April 23-24 from Assen Netherlands