Photos from the great Mark Walters

No fewer than seventeen crews took to the grid for this, the third round of the 2022 FIM Sidecar World Championship.

Absent on Isle of Man TT duty were Tim Reeves/Kevin Rousseau and Harry Payne/Mark Wilkes. Ordinarily, it might easily have been a case of “when the cat’s away”, but the two crews at the top of the standings maintained the pace which got them there and starred once more in Belgium.

Qualifying was a different story, with Ellis/Clement eking out a full two and a half seconds ahead of Streuer, Schlosser and Steve Kershaw/Ryan Charlwood (Quattro Yamaha). The absence of Tim Reeves was not lost on the Scotsman, and Kershaw/Charlwood have been steadily improving as the season unfolds. Once again, impressive times were posted by Ted and Vincent Peugeot positioning them as main challengers to the top four.

The second timed session was even more fascinating. Although Ellis fell short of his earlier time, the work was done. Kershaw excelled this time around and was second fastest. Ted Peugeot got completely inspired and shoved Benny Streuer back to fifth. British teams Rob Biggs with stand-in French passenger Max Vasseur (Santander Salt Yamaha) and Kevin Cable and Chaz Richardson (L&W Yamaha) did themselves proud, ending up in the top half with strong grid positions. Ellis took pole from Benny Streuer, with Kershaw and Schlosser on row two.

What we are seeing this year is a changing of the guard and a strong message that given the financial support and recognition, there is a fantastic sport just waiting for new talent to flex its muscles. The level of enthusiasm is exceptional, and the quality of racing high.

Rob Biggs and Kevin Cable sat seventh and eighth after brilliant starts, so the British crews were all in the hunt. Rupert Archer/Steve Thomas made good ground climbing to ninth behind Cable/Richardson.

Lap four and Schlosser was on the move, less than one second slower than Ellis the race leader. This increase in pace took him past Kershaw and into third place. Moments later, he was in second ahead of Streuer. It was all to play for at the front with Ellis defending his slender four-point advantage in the standings.

Likeable Swiss Lukas Wyssen with Thomas Hofer alongside eased past Ted Peugeot into fifth, albeit seven seconds adrift of Kershaw. There were several distinct battles through the field, with Ellis/Schlosser scrapping for the lead, Streuer and Kershaw similarly engaged, and Wyssen/Peugeot having their fight.

With eight laps completed, Ellis held one and a half seconds over Schlosser, with Kershaw closing in for the final podium place on Streuer. Wyssen and Peugeot were welded together as Biggs/Vasseur held a strong seventh.

Lap nine, and Ellis posted his best lap and fastest of the race, easing away from Schlosser who appeared to have no answer for the Santander Salt duo. At this point in the race, the Swiss normally gets second wind, but there was no sign of that here in race one Spa.

Penultimate lap, and the gap was over two seconds, with Ellis showing no sign of easing off the pace. Kershaw/Charlwood still had a chance to grab third from Streuer, but they would need to make it happen soon. This they did in dramatic fashion, moving into the third podium place as they entered the final chicane on the final tour of this iconic circuit.

Ellis/Clement took victory at the flag from Schlosser/Fries by one and a half seconds. A late charge by the Swiss was not enough to nail the young Anglo/French pairing. 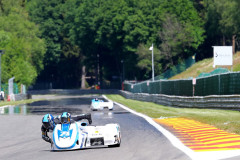 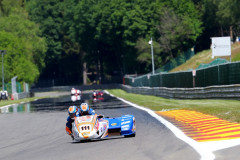 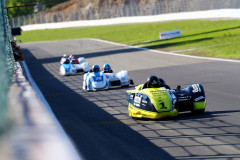 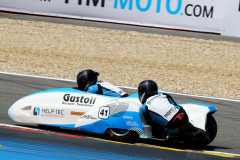 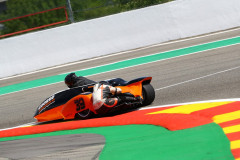 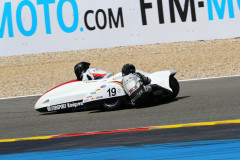 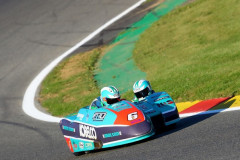 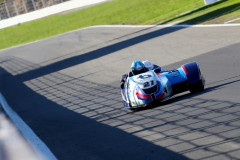 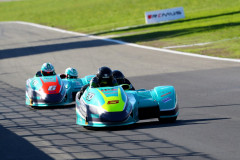 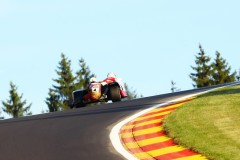 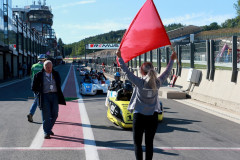 Benny Streuer had another flyer in race two, but it was Schlosser/Fries who headed the pack after the opening lap. Kershaw trailed Ellis, as the first race winners looked for a way past Streuer.

issues all race but held on. Just seven tenths split the top two title rivals in the early stages. Three laps in and Kershaw/Charlwood were hunting down Benny Streuer, Rob Biggs/Max Vasseur were closing on in on a slowing Ted Peugeot, and Cable/Richardson were feeling the heat from Rupert Archer.

With a new fastest lap, Todd Ellis assumed control at the front, as he and

Emmanuelle Clement eased past Schlosser. Tenth place was filled by the

Pierard brothers, having another fine ride for Belgium. The scrap between Kevin Cable and Rupert Archer was one of the closest of the race to the half

way point. The L&W Contractors Yamaha of Cable was flying, and he and Charlie Richardson kept their noses in front.

Lap eight, and the Swiss Gustoil Yamaha of Schlosser was right with

Ellis/Clement. Kershaw appeared to have dropped out of contention for a

podium, but there was still a long way to go.

Schlosser made the move everyone thought was coming, as he slotted past Ellis to go to the front. This positioning would effectively cancel out the advantage earned by Ellis in race one. Stern action was called for, but was it possible?

Archer passed Cable, moving the Hannafin Adolf RS to a great eighth place, as Schlosser extended his lead to three tenths. This was World Championship sidecar racing at its best, with the three fastest crews split by just over two seconds.

Final lap and it had all changed at the front with Ellis once more leading. Kevin Cable had reclaimed eighth, and it was game on to the flag. The

winning margin was three-tenths with double victory to Ellis. His title lead is now extended to fourteen points.

Round four comes from The Pannoniaring Hungary June 17-19