Huge thanks to Mark Walters for all images!

The last weekend in October is often tricky for its weather in Portugal, and we were not disappointed. Track temperature on arrival hovered around twenty-two with an ambient of twenty. Humidity was also high with periodic rain forecast for the weekend. This cliff-hanger finale was poised to give victory to Santander Salt’s Todd Ellis and Emmanuelle Clement with their fifty-one-point advantage. Their goal surely must have been to put the title out of reach of rivals and defending champions Markus Schlosser and Marcel Fries in the opening race. Double points in both races however were a major consideration for both contenders. This factor could also radically change the complexion of the table further down the order.

Early on Friday the first private practice saw Schlosser/Fries in determined mood as they, along with Bennie Streuer/Kevin Kolsch and Ted/Vincent Peugeot headed the field from Wyssen/Hofer, Kershaw/Charlwood and Payne/Crowe.

In free practice proper, the two key players were top of the pile from the off, with Steve Kershaw/Ryan Charlwood fresh from Brands Hatch victory, making themselves conspicuous, going third fastest in the early stages.

That changed as Ellis and Schlosser slugged it out, getting the measure of what was to come. With ten minutes left, Kershaw was back in the game, going second fastest. The top three were all in the 1.47’s with Ted Peugeot, Lukas Wyssen and Sam/Tom Christie the best of the rest along with Pekka Pavairinta/Ilse de Haas.

Ellis hit back, moving to within a fraction of Schlosser’s new time of 1.46.680 as the clock ticked into the final few minutes.

Two twenty-minute sessions would sort out the grid, both on Saturday afternoon. Rain was predicted later in the day, but it held off for the teams to get a decent run.

Immediately, Ellis/Clement laid down a marker with the only lap in the 1.46 bracket, clearly meaning business. Veteran Finn Pavairinta slotted fourth fastest but as the session wore on he was replaced by Sam/Tom Christie having a rare FIM outing having already finished runners-up in the British series. Ever present Kershaw/Charlwood sat third with Lukas Wyssen/Thomas Hofer climbing to fourth with three minutes left on the clock.

Closing stages and the wily Schlosser found half a second to knock Ellis off the top. Bennie Streuer, having missed free practice, ran eighth behind Pavairinta/de Haas. Despite a flying final effort, Ellis missed the provisional cut by just two tenths, but you could sense there was more to come later.

Session two and mercifully conditions were as good, so it was still game on at the front. Five minutes in and Ellis/Clement had turned purple across the board, bettering their earlier time by three tenths to go top. Next lap and they did it again. The British Champions were on fire this time out with eyes firmly set on victory. Schlosser was next fastest, almost one second adrift of the pair, until Kershaw/Charlwood threw a hand-grenade into the party, going top with eight minutes left to go. Schlosser then upped his game to move ahead of Ellis. The newly crowned British Champions would share row two with Ted Peugeot, by far his best qualifying and a sign of things to come from the young Frenchman.

Race One – Despite the morning warm-up being a total washout, the day improved steadily, with the track perfect for the race. The Quattro Yamaha of Kershaw/Charlwood sat proudly on pole position alongside Schlosser. Despite running well in qualifying, Bennie Streuer was to sit this one out with a blown engine which could not be fixed.

Ellis needed a good start, but eighteen laps was a long way, with no need to panic. A fifty-one-point lead was big, but Schlosser was a fearsome adversary to be respected. The Swiss grabbed the hole shot followed by Kershaw, but Ellis was on a mission from row two, taking the lead halfway round lap one to grab control at the front. Schlosser also lost out to the flying Quattro mounted Kershaw/Charlwood, as Ted and Vincent Peugeot battled hard with Sam and Tom Christie.

As leaders, the Santander Salt duo were on target to put the championship out of reach and get the job done in this opening race. All they needed to do was stay ahead of Schlosser. 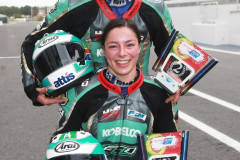 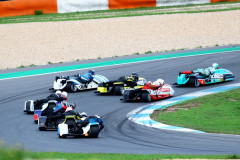 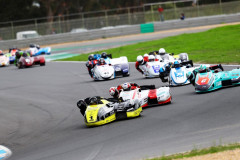 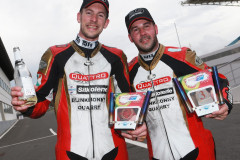 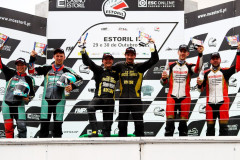 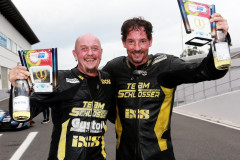 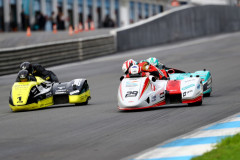 Then amazingly, after a sensational lap four, Kershaw was in the lead, nudging Ellis out of ten points and almost into the claws of Schlosser.

Two laps later, and the title leaders were down in third behind Schlosser. Just four tenths split the top three at this point as Kershaw/Charlwood raised the stakes. Half race distance and Schlosser/Fries were now all over the Quattro Yamaha of Kershaw as they sought to maximise their effort.

Then suddenly on lap ten, Schlosser was in front and going like a train. He was not going to surrender easily, and Todd Ellis had a fight on his hands to limit the damage.

An equally tight scrap was taking place for fourth, as Wyssen, Peugeot and Christie slugged it out wheel to wheel. Sam Christie was in fifth place, but it was a close call. Pekka Pavairinta sat seventh, but twenty-plus seconds adrift of the leaders. He was later to suffer tyre degradation, unable to improve. Harry Payne/Callum Crowe were next up with Kevin Cable/Chaz Richardson ninth. Payne was in trouble with a slowing engine, so he too was consigned to battle for the lower points.

In this leading position, Schlosser was reducing the deficit by a good amount, leaving nothing on the table. Into the closing stages and the defending champion had opened a five second advantage over Kershaw who was by now coming under real pressure from a resurgent Ellis/Clement. On the penultimate lap, Ellis found a way past the Quattro Yamaha, so his damage limitation was working. With this showing, it would all go to the final race on Sunday. Despite a fast final lap, Ellis could not close on the race leader Schlosser, so climbed the podium in second place with a reduced series lead of forty-one points.

Race Two – There was a clear mandate for Markus Schlosser/Marcel Fries, and that was to take victory regardless. In that event, Ellis/Clement needed a top eleven finish. A retirement for either crew could not be countenanced.

To have this series go all the way to the final race, was a promoter’s dream come true, and quite a way for Roger Body to exit that role.

The weather was perfect to sign off the season, and nerves were jangling as thirteen starters lined up for this last hurrah of 2022. Once again the Gustoil Yamaha of Schlosser hit the front.

Kershaw/Charlwood were keen to go out in style and hung onto the Swiss pair’s coat tails, with Ellis keeping his powder dry in third. He was staying in touch and playing a waiting game. Lap three and Steve Kershaw then did Todd Ellis a massive favour as he forced by the race leader to put the Quattro Yamaha ahead.

One lap later and Sam/Tom Christie nudged ahead of Ellis, demoting him to fourth. This was a magnificent performance from the Beverly based brothers, backing up their fine British season. Literally moments after this move, the defending champion was back in front aiming for fifty more points. On lap nine, the Santander Salt Yamaha of Ellis/Clement re-took the Christies to move back to third. This was easily job done if Todd could stay there.

Schlosser banged in the fastest lap of the race with a 1.45.837 to underline his intent, but with Ellis sitting pretty it was all for nothing at this stage.

Over half distance, Christies were fourth, Lukas Wyssen fifth, Ted Peugeot and Pavairinta sixth and seventh. These top seven crews were split by just eight seconds with ten laps completed.

This was a stellar show by the defending champions, and an equally good fight by Kershaw/Charlwood. Ellis show maturity beyond his years, and simply kept his cool. Harry Payne/Callum Crowe led the rest of the chasing bunch with their ailing engine, but way off the back of Pavairinta in seventh. Kevin Cable/Chaz Richardson were next up having a great fight with Rupert Archer/Steve Thomas. The L&W Team have enjoyed a solid and satisfying season, with a good overall position to show for it. Archer too enjoyed his weekend, and this pair had a great second race together.

With two laps to go, Schlosser could do no more, and appeared to be going down in style. Then, remarkably, the Swiss pair had a rare moment and spun. Kershaw took the lead again, repeating the favour to Ellis. Former team-mates, this was working well for Santander Salt and Ellis/Clement. 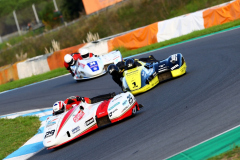 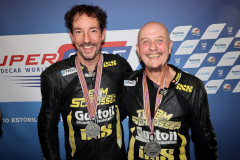 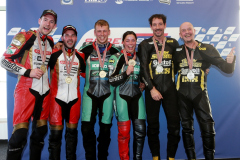 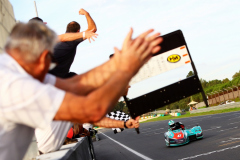 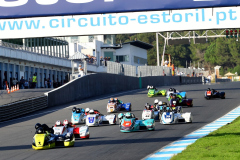 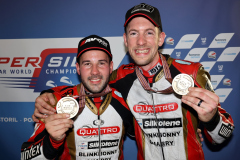 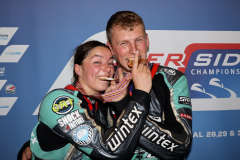 That is the way it stayed, with the Quattro Yamaha of Kershaw/Charlwood taking victory ahead of outgoing champions Schlosser/Fries, and Todd Ellis/Emmanuelle Clement completing the podium, lifting the 2022 FIM Sidecar World Championship in the process. Twenty-seven-year-old Ellis from Lincolnshire now joins an elite band which includes Tim Reeves, Steve Webster, and the late Jock Taylor as winners of both World and British titles in the same year. His passenger Emmanuelle Clement can also now add the FIM Gold Medal to her British and French title successes.

All the battles behind the leading trio in this Estoril finale are very worthy of recognition, as all thirteen crews finished with heads held high.

Full standings will be available on the FIM website, with our TV highlights show to follow shortly.